When We Open Our Eyes

It can be so easy to only see the adversities and struggles surrounding us in our circumstances. I don't think I have ever had this much going on in my life all at one time. From scheduling a move across the country, to raising support, the planning behind a career change, and the list goes on. It can be daunting and straight up overwhelming, and that's if everything goes smoothly. I wouldn't say all has gone smoothly for us so far. If I told you all the things that have happened to make things, not smooth, you may not believe me. You know the saying, "When it rains it pours", right? It's crazy, we've never had so many car issues in our lives, not just one car, but both, and not minor car issues, the "T" word, transmission. One of our kids was sick with a nasty virus that seemed relentless and unshakeable. That's just to name a few of the circumstances we saw ourselves surrounded by. All at one time.

As I was spending some time with God this week I was led to the Old Testament story of Elisha and his servant found in 2 Kings chapter 6. After I finished reading the story I couldn't help but feel so much like Elisha's servant. The story doesn't reveal his name, but I bet it was Carlos. Check out a portion of his story, you may find that it's not only his story alone, or mine, but yours as well.

When the king of Aram was at war with Israel, he would confer with his officers and say, “We will mobilize our forces at such and such a place.” But immediately Elisha, the man of God, would warn the king of Israel, “Do not go near that place, for the Arameans are planning to mobilize their troops there.” So the king of Israel would send word to the place indicated by the man of God. Time and again Elisha warned the king, so that he would be on the alert there. The king of Aram became very upset over this. He called his officers together and demanded, “Which of you is the traitor? Who has been informing the king of Israel of my plans?” “It’s not us, my lord the king,” one of the officers replied. “Elisha, the prophet in Israel, tells the king of Israel even the words you speak in the privacy of your bedroom!” “Go and find out where he is,” the king commanded, “so I can send troops to seize him.” And the report came back: “Elisha is at Dothan.” So one night the king of Aram sent a great army with many chariots and horses to surround the city. When the servant of the man of God got up early the next morning and went outside, there were troops, horses, and chariots everywhere. “Oh, sir, what will we do now?” the young man cried to Elisha. “Don’t be afraid!” Elisha told him. “For there are more on our side than on theirs!” Then Elisha prayed, “O LORD, open his eyes and let him see!” The LORD opened the young man’s eyes, and when he looked up, he saw that the hillside around Elisha was filled with horses and chariots of fire. As the Aramean army advanced toward him, Elisha prayed, “O LORD, please make them blind.” So the LORD struck them with blindness as Elisha had asked.

How many times have we been there? Hopeless and ready to throw in the towel. But what if we asked God to open our eyes. To open our eyes so wide that we would see past the physical obstacles and opposition that surrounds us. Here are a few things God reminded me of.

​The enemy is real. It's too easy to forget that we don't just live in a physical world. There are spiritual forces of good and evil that are very much part of our world. Satan may not be coming at you dressed in red and holding a pitchfork, but he's coming at you. Ever read the story of Job? Satan came at him and surrounded him. Jesus reminds us that the enemy comes to kill and destroy.

God is bigger. There is more of God in this world to go around than there is of the enemy. God loves us in a tremendous way. His love for us is outrageous and there is nothing He wouldn't do for us. He displayed that to us through His son Jesus and through Jesus we win. We have victory over Satan in every way possible. Do you believe that? Check out Romans 8.

Look up. Trust God and look up. When things get crazy in our lives we have the tendency to close our eyes and look down. Open your eyes, lift up your head and look up. God can be counted on. So things haven't all turned out your way, that's ok. It doesn't mean God can't be counted on. It's probably better that things didn't all turn out the way we would of wanted. Trust God. Have faith in Him.

May we open our eyes and see God. May we see Him working out all the details of all the little and big issues surrounding our lives. Don't miss what God is doing in your life because you didn't open your eyes to see. God's got you. He loves you. He stands above everything. He made everything. He is Lord of all. He's got this. 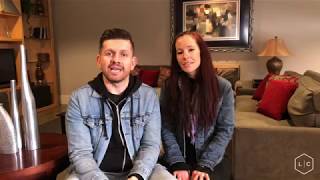 We Find Him In The Deep End

When You Can't Explain It